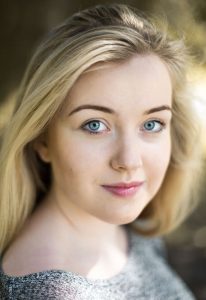 We would like to take this opportunity of wishing Julie a wonderful show.

Originally from Waterford, Julie started acting at a young age when she joined the David
Hennessy Stage School in 2006. Since then, she has been heavily involved in the local
theatre scene where she was a member of the South Eastern Theatre Group playing roles
such as Fantine (Les Misérables), Gigi (Miss Saigon) and Cosette (Les Misérables), as
well as being involved with various other companies such as Ignite Productions, Loose
Screw Theatre Company and Waterford Panto Society.
Recently, Julie travelled with the company of the new Irish musical Find Your Way
Home where she originated the role of Eva. The show went on tour in the US which
included performances in Albany, Boston and New York City. She also played the role of
Jill in the pantomime, Polly and the Beanstalk in the Olympia Theatre last Christmas.
This summer, Julie toured across England with the National Gilbert and Sullivan
Opera Company, performing in their productions of Iolanthe, Ruddigore, Trial by Jury, The
Sorcerer and The Pirates of Penzance.
Julie received a Distinction in the Foundation Diploma in Acting and Theatre Studies
from The Lir Academy, Dublin, as well as a Level 7 Diploma in Musical Theatre from the
Irish College of Music Theatre. She is currently in her final year of the BFA programme in
Musical Theatre in American College Dublin.